Coface’s first Brazil payment survey, which was conducted with over 120 companies, reveals that they are still facing a challenging environment. 2017 has just begun, but the year’s GDP forecast is already lackluster. Although activity is expected to leave recession, growth is expected to achieve a meager 0.4 %.

Nearly half of the companies reported deteriorated payment experiences, due to clients’ financial difficulties

The granting of terms of sales is a commonplace practice in Brazil. Nearly all of companies in the sample (97 %) offer this possibility to their clients. This strategy is driven by market competition, as a surprisingly low number of respondents cited clients’ cash flow issues.

The bleak economic bleak environment has cast a shadow over payment behaviour. The majority of companies (58 %) observed an increase in their delinquency rates in 2015, compared with 2014. The outcome for 2016 was more divided, as the survey found that payment experiences had deteriorated in comparison to the previous year for 46% of companies. For the majority of companies (79%), averages overdue do not exceed 30 days. The same percentage of interviewees reported that the situation had remained stable in 2016, while a minority of 8 % has seen improvements.

Only 13% of companies reported having a ratio of over 5% on risk exposure (ratio of total sales in overdue, to total turnover). For almost 40%, this ratio is between 0.5% and 2% of their total turnover.

According to 57% of the respondents, the most frequent reason given by their clients when requesting payment extensions is ‘financial difficulties’, followed by ‘high delinquency rates in their client portfolios’ and ‘customer management problems’. Moreover, 81% of companies cited the economic recession as being the principal macro fundamental impacting their clients’ performance.

Political instability is also high - and is unlikely to calm down in the short term.  The EPU political uncertainty index corroborates this perception (see chart below – the higher, the worse).  In the period since the start of the car wash operation in March 2014, up until the month of December 2016, the index gained around 247 points. 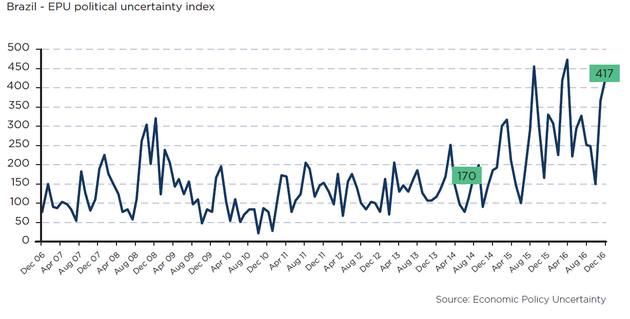 Most effective action in case of default

The vast majority (78 %) of Brazilian companies believe that amicable negation is the most effective tool for resolving non-payments.

Nevertheless, enforcing contracts in the country is not easy.. According to the 2017 Doing Business Index, it takes, on average, 731 days and costs 20.7 % of the value of a claim.  As a comparison, the average for the Latin America region is 749 days, at a cost of 31.3% of the claim.

As regards insolvencies, the majority of surveyed companies (58 %) saw the number of clients that filed for Chapter XI soar in the last year. In 2015, a hike of 55 % was reported compared to 2014.  A further increase of 45 % YoY was observed in 2016. Among those companies that reported an increase in Chapter XI cases, 53 % did not evidence changes in the client´s behaviour prior to the request. Over recent years, Chapter XI has become more and more common in Brazil and is affecting companies of varying sizes and sectors.

Delays in payments across the sectors

Across the sectors analysed, the average share of companies suffering from payment delays is 75 %, with these delays appearing to be high in almost all industries. Information & communication technologies, along with construction, are the most affected, with all (100 %) companies reporting payment issues.  Surprisingly, the least affected sector is retail (36.8 %).

Average overdue days per sector are generally up to 30 days. The only segments which reported delays of over 121 days were construction and agri-food. Finally, it is also of interest to note that none of the cases in our sample exceeded 150 days.