Risks to global trade will continue to loom over the economy

The economy is expected to avoid recession and rebound slightly in 2020. Singapore is the quintessential small, open economy: imports and exports represent 150% and 176% of GDP, respectively. As such, it is particularly sensitive to the global business cycle and developments in international trade, with exports expected to shrink by 10% in 2019. Export performance will be strained again in 2020 by the economic fallout from the Hong Kong protests, the Chinese slowdown and uncertainty stemming from the Sino-American trade war. Trade woes are concentrated in the manufacturing industry, and in particular electronics and machinery, which account for half of the export basket and have seen a sustained decline in output. In contrast, the pharmaceutical and financial services industries, as well as oil refining and marine engineering, have held up well and will act as buffers. Financial firms diverting their activity away from Hong Kong in reaction to the political turmoil will stimulate FDI. At 27% of GDP, investment will remain high by developed country standards. The city-state’s high population density and propensity to attract foreign talent pose the risk of a property bubble, which authorities are combating by tightening financial regulation. Private consumption, which accounts for only 35% of GDP, will remain resilient amidst sustained wage growth and low unemployment (2%). In response to the surprisingly acute slowdown observed in Q2 2019, the monetary authority loosened the speed at which the Singaporean dollar depreciates against the composite currency basket to which it is pegged, making for the first monetary easing in 3 years.

With a current account surplus of 16% of GDP and a trade surplus of 25%, Singapore enjoys an extraordinarily strong external position. While export-led growth has been the basis for an outstanding development performance, such a dependence on external demand could make the economy harder to manage in a context of deglobalization, trade policy uncertainty and sluggish global growth. While the country is a net exporter of capital by a margin, its holdings are tilted towards portfolio assets while its liabilities have a large share of FDI, creating a negative yield differential that results in an income balance deficit. Most of imports are inputs used by the manufacturing and oil-refining industries, making the net impact of trade headwinds on the current account largely muted. The largest single determinant of trade performance is demand for electronic components and consumer electronics, which in addition to protectionist headwinds suffers a maturing tech cycle. Though high in appearance, public debt is used to create a domestic safe asset market and is constitutionally isolated from the funding of expenditures. Years of fiscal surplus accumulation have amassed large fiscal reserves (estimated at 300% of GDP) on which the government can draw to finance rare deficits. This margin, along with political continuity, allows authorities to direct spending to forward-looking policies such as labor force retraining and environmental programs.

A new generation of party technocrats to underpin political stability

Though elections are officially scheduled for 2021, the convening of the Electoral Boundaries Review Committee (the body responsible for drawing the electoral map) in September 2019 signals that the vote will be moved forward to early 2020. The People’s Action Party (PAP), which has ruled the country since gaining independence in 1965 and currently holds 83 out of 89 legislative seats, is virtually guaranteed to continue in power. However, it will be crucial for the PAP to obtain an emphatic victory, as it seeks a strong popular mandate for the recently appointed fourth generation of party leaders. Deputy PM and finance minister Heng Swee Keat is positioned to take the reins from current PM Lee Hsien Loong, son of founding statesman Lee Kwan Yew. In contrast to the smooth functioning of the PAP, the opposition is weakened by the recent legal woes of the Worker’s Party (WP). In October, leading figures of the WP were found guilty of misusing public funds, ending their chances of standing as a credible alternative. The combination of outstanding political continuity, an apparent absence of corruption and a technocratic approach to policy design have catapulted Singapore into one of the world’s most prosperous economies. Thanks to its deep integration into global supply chains, state of the art port infrastructure and bureaucratic seamlessness, it ranks second in the World Bank’s ease of doing business ranking.

The amicable phase begins with the seller contacting buyers in writing, by telephone and, where permissible, by visiting the buyer’s business premises. If there is no response from the buyer, a site visit and online searches are conducted to ascertain the operating and legal status of the buyer. If the buyer does not make attempts to settle the matter amicably, legal proceedings can be used to recover payments for goods sold and delivered in Singapore. It is, however, prudent to ensure that the buyer has sufficient assets to satisfy the debt before proceedings are initiated.

Singapore is a common law jurisdiction. Its laws are principally governed by Supreme Court of Judicature Acts, State Court Acts, other statutes which have procedural application (or contain procedural provisions), the Rules of Court, practice directions, case law and the court’s inherent powers.

If a defendant fails to enter an appearance or fails to file a defence within the time specified in the writ, the plaintiff may enter default judgment against him. This can be a final judgment or an interlocutory judgment, depending on the nature of the claim.

A judgment can be enforced by a variety of writs of execution. These include a Writ of Seizure and Sale of movable and immovable property, a Writ of Delivery and a Writ of Distress. These writs authorise court officials to take appropriate measures to give effect to the judgment.

This can be an appropriate solution when the debtor is owed a debt by a third party (the garnishee). When the creditor garnishes the debt, the garnishee must then make payments due to him, rather than to the debtor. To collect these debts, the creditor must first apply for a garnishee order nisi. This can be filed without the involvement of other parties and leads to “show cause” proceedings. If the garnishee confirms that there are monies due and owing to the judgment debtor at this stage, the Registrar may proceed to make the garnishee nisi absolute.

If the creditor is not able to enforce his judgment in Singapore, he may be able to enforce it in a country where the debtor holds assets. This can be done by commencing fresh proceedings, or by registering the Singapore judgment in the foreign country (on the basis of reciprocity of enforcement between the two

When a company is in financial difficulty but has reasonable prospects of being rehabilitated, or if preserving all or part of its business as a going concern (or even that the interests of creditors would be better served than by resorting to a winding up), the company or its creditors can apply to court for an order that the company be placed under the judicial management of a judicial manager.

If an insolvent company is unable to overcome its difficulties, it can be dissolved. This enables the liquidation of its assets, so that creditors can be repaid, at least in part. This process is known as winding up or liquidation. A healthy company can also be subject to winding up if its members no longer wish the business to continue. When a company is wound up, its assets or proceeds are first used to pay off any creditors. Following this, any balance remaining is distributed pro rata amongst shareholders. 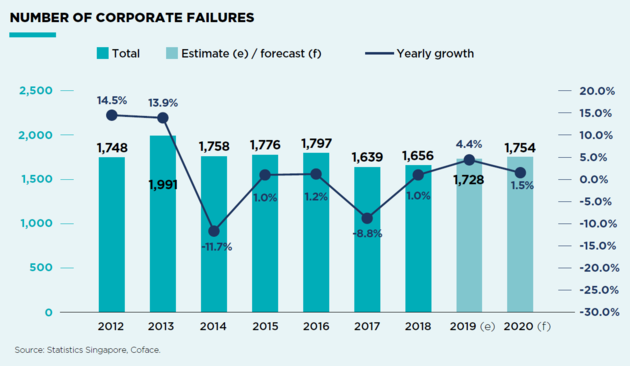