A more sustainable growth path after the strong 2021 rebound

The year 2021 brought a surprisingly strong rebound from the pandemic. Thanks to relatively good pandemic management, with 86% of the adult population fully vaccinated by mid-November 2021, the basis for economic recovery was favourable. Furthermore, the focus of the Danish manufacturing sector on pharmaceuticals (18% of all exports) and machines for renewable energy (13%), which are less dependent on scarce input goods like computer chips, turned out to be a strategic advantage last year. Moreover, the strong export relations of Denmark to well-developed Northern Europe supported growth. Therefore, GDP already reached pre COVID-19 levels in Q2 2021. While this positive economic development should continue in 2022, the strong growth rate of 2021 cannot be maintained. Private consumption should still increase moderately, but not boom. The Danes have not much changed their consumption behaviour in the second half of 2021, although strong savings and early holiday allowance payouts gave them the financial opportunity. Support for consumption comes from the labour market, as the unemployment rate should reach its lowest level since early 2009 this year. This will lead to stronger wage growth. However, some of this higher purchasing-power will be balanced out by a stronger inflation, which should mainly come from higher energy prices, a tax increase on tobacco in January and high industrial input prices that are passed on to the consumers. Machinery and equipment investments, as well as construction, should also progress moderately. The EU Recovery and Resilience Facility plan for Denmark was approved in June 2021 leading to the disbursement of EUR 1.5 billion (0.5% of GDP, 0.2% for 2022) in grants over the period 2021-2026 to mainly finance projects to support the climate objectives and digitalization. While net exports should still contribute to GDP growth, albeit to a lesser extent than in 2021 due to stronger imports, the main change should come from the public sector. According to the budget plan of the government, public spending should decrease from DKK 1,222 billion (49% of GDP) last year, to DKK 790 billion (30% of GDP) this year, due to the phasing out of many pandemic-related support measures. The main initiatives in 2022 will be investments into education, green technology and retraining measures for unemployed people. The central bank of Denmark had increased its policy rate by 10 basis points to 0.7% in March 2021 before returning to 0.6% in September to hold the Danish krone’s peg with the euro (its main target). Furthermore, the central bank intervened in most months to sell DKK on the FX market in 2021. This year, the work of the monetary policymakers should become a bit easier, when the ECB finishes its Emergency Purchasing Programme, diminishing the appreciation pressure on the DKK.

Public budget returns to a surplus

After two years of small deficits, the public budget balance should turn positive again in 2022 due to decreased expenditures and increasing tax revenues (starting April, companies that postponed their tax payments during the recession will have to slowly catch up with their arrears). Gross public debt will therefore shrink further and remain very low in European comparison. The current account surplus should remain high. While the goods trade surplus should decrease and transfer payments should increase, this should be levelled out by higher exports of services thanks to tourism and expensive shipping services, as well as higher income from Danish overseas investments.

Since June 2019, Prime Minister Mette Frederiksen from the Social Democratic Party (SD) is leading a minority government with the support of the other “red-block” parties: the Social Liberal Party, the Socialists People’s Party, the Red-Green Alliance and three single parties from Greenland and the Faroes Islands. Thanks to an overall successful handling of the pandemic, popular support for the SD has remained high. In addition, the government co-opted many right-wing immigration policies: for instance, in September 2021, the government announced a plan that would force more migrants (targeting women especially) to work in order to be eligible for state benefits. This popular position, in combination with a divided conservative/right-wing opposition, contributes to a clear lead of the SD in the polls. However, investigations are going on about Frederiksen’s illegal order to kill all living mink in Denmark in November 2020, as a prophylactic measure to avoid a further spread of a new mutation of the COVID-19 virus. It is unclear if Frederiksen knew that her order was illegal when she gave it, or if she realized it later on. Nevertheless, it is expected that Frederiksen will remain in office until the next regular election in 2023.

Denmark is in the process of becoming a cashless society. Bank transfers are the most commonly used means of payment. All major Danish banks use the SWIFT network, as it is a rapid and efficient solution for the payment of domestic and international transactions. Denmark has also implemented the Single Euro Payments Area (SEPA) in order to simplify bank transfers in euros.
Cheques and bills of exchange are now seldom used in Denmark. Both are seen as an acknowledgement of debt.
Unpaid bills of exchange and cheques that have been accepted are legally enforceable instruments that mean that creditors do not need to obtain a court judgement. In cases such as these, a judge-bailiff (Fogedret) is appointed to oversee the enforcement of the attachment. Prior to this, the debtor is summonsed to declare his financial situation, in order to establish his ability to repay the debt. It is a criminal offence to make a false statement of insolvency.

The amicable phase begins with the creditor, or his legal counsel (e.g. attorney, licenced collection agency, etc.), sending the debtor a final demand for payment by post, in which he is given 10 days to settle the principal amount, plus any penalties for interest provided for in the initial agreement.
Once the 10 days from the date of the letter of demand have expired, the creditor’s legal counsel can charge the debtor for out of court collection costs (based on an official tariff) and present the debtor with a debt collection letter which gives them 10 further days to pay. If this payment deadline is not respected, the debtor can be sent a warning notice which sets out the date and time of a visit. A third reminder can be sent and calls can be made.
When no specific interest rate clauses have been agreed by the parties (maximum of 2% per month), the rate of interest applicable to commercial agreements contracted after 1 August 2002 is either the Danish National Bank’s benchmark, or the lending rate (udlånsrente) in force on 1 January or 1 July of the year in question, plus an additional 8%.

Since January 1, 2008, overdue payments which do not exceed DKK 50,000 or EUR 6,723 and are uncontested are handled via a simplified collection procedure (forenklet inkassoprocedure), whereby the creditor submits an injunction form directly to the judge-bailiff for service on the debtor. If there is no response within 14 days, an enforcement order is issued.

If a debtor fails to respond to a demand for payment, or if the dispute is not severe, creditors can obtain a judgement following an adversarial hearing or a judgement by default ordering the debtor to pay. This usually takes three months.
In the case of a judgement by default, the debtor can be ordered to pay the principal amount plus interest and expenses (including court fees and, where applicable, a contribution to the creditor’s legal costs) within 14 days.
All cases, whatever the size of the claim and level of complexity, disputed or not, are heard by the court of first instance (Byret). The court is presided over by a panel of three judges, or one judge assisted by experts, who consider both written and orally-presented evidence.
Appeals on claims which exceed DKK 10,000 are heard by one of two regional courts − either the Vestre Landsret in Viborg (for the Jutland area) or the Østre Landsret in Copenhagen (for the rest of the country). Exceptional cases that involve questions of principle can be submitted directly to the appropriate regional court.
These proceedings involve a series of preliminary hearings, during which the parties present written submissions and evidence, and a plenary hearing, in which

the court hears witness testimonies and arguments from both parties. Court costs depend on the value of the claim. The losing party generally bears the legal costs.
Denmark only has commercial courts in the Copenhagen area. These comprise a maritime and a commercial court (Sø-og Handelsretten), which are presided over by a panel of professional and non-professional judges. These judges are competent to hear cases involving commercial and maritime disputes, competition law, insolvency proceedings and cases involving international trade.

Enforcement of a legal decision

Domestic judgements become enforceable when all appeal venues have been exhausted. If the debtor fails to comply with the judgment within two weeks, the creditor can have it enforced through the bailiff’s Court. Enforcement can take the form of a payment arrangement, or a seizure of the debtor’s assets. Payment plans are normally agreed in court and the debtor’s assets that can be seized are normally agreed at the same time. Courts normally accept payment plans of up to ten to twelve months depending on the amount.
As concerns foreign awards, the scenario can be more difficult if the decision is issued by an EU member, as Denmark does not adhere to the EU regulations on European Payment Order procedures. Decisions issued by non-EU members can be recognised and enforced, provided that the issuing country is part of a bilateral or multilateral agreement with Denmark.

Non-judicial restructuring can take place through formal composition agreements, whereby the debts owed to the creditors are acknowledged and payment instalment agreed upon, without having recourse to a judge. Nevertheless, the efficiency of the Danish court system means that out-of-court proceedings tend to be used as informal negotiation tools.

Restructuring procedures are based on decisions handed down by the bankruptcy court. The court examines the possibility of a compulsory composition and/or a business transfer. These proceedings can be initiated by the debtor, in cases of insolvency, or by the creditor (but only with respect to legal entities). The court then appoints a restructuring administrator. The debtor maintains control of his assets during the procedure but is not allowed to enter into transactions of material significance without the consent of the restructuring administrator. The outcome of the procedure depends on the administrator’s proposal.

Liquidation procedures are based on bankruptcy orders issued by the Court, either at the request of the debtor or a creditor. The debtor must be insolvent. The Court appoints a trustee who is authorised to act in all matters on behalf of the bankrupt estate. His primary objectives are to liquidate the debtor’s assets and distribute the proceeds between the creditors. Creditors need to file their claims with the trustee for assessment. 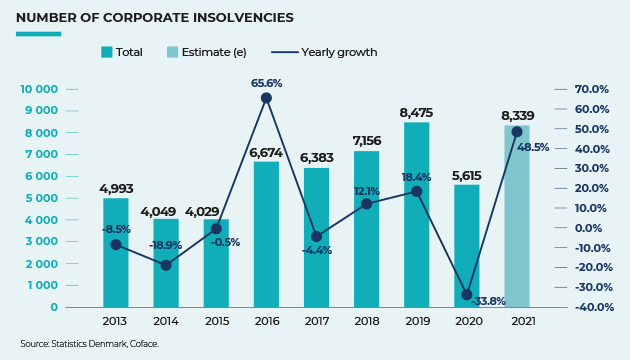