Singapore’s economic recovery will broaden out as the country further treats COVID-19 as endemic and reopens its borders. While we expect the GDP growth rate to moderate in 2022 after a solid rebound in 2021, it is still likely to remain above trend. Still robust external demand will benefit the Singaporean economy given its heavy reliance on international trade, albeit less than previously expected. Although Singapore does not have strong economic ties with Ukraine and Russia, the war in Ukraine and subsequent sanctions affect global consumption and exacerbate already tight supply conditions, affecting international trade. Moreover, China’s stringent COVID policy adds downside risks.


That being said, the dynamic demand for electronic products, as well as for machinery and transport equipment , which together account for almost half of all domestic exports (merchandise exports excluding re-exports), should support the manufacturing industry (>20% of GDP). The info-communications and financial sectors (nearly 20% of GDP) will also continue to grow robustly, alongside the pharmaceutical industry, in the COVID era. Construction should continue to face challenges related to higher material costs and labour shortages. Despite relaxation of border restrictions and domestic COVID-related containment measures, private investment (around 25% of GDP) may be constrained by an enfeebled business confidence in a context of geopolitical uncertainty, global economic slowdown and rising inflation affecting input costs.


In the first quarter of 2022, the unemployment rate was back to pre-pandemic level at 2.2% and job vacancies recorded all-time highs. While an improvement in the labour market will support household spending (33% of GDP), consumers’ purchasing power is being eroded by rising inflation, which is a key concern for the authorities. The consumer price index growth rate hit over a decade-high in May 2022, driven by food, utilities and transport costs. Rising inflationary pressures was the key reason behind the Monetary Authority of Singapore’s decision to tighten its monetary policy thrice within six months, including an off-schedule policy meeting in January 2022.

A move towards fiscal balance

The budget deficit has drastically narrowed from 15.4% in FY2020 to 0.9% in the fiscal year ending in March 2022. As the crisis subsided, the government’s relief measures became more targeted in 2021, aiming at supporting businesses and workers in vulnerable sectors (e.g. retail, food & beverage, aviation), as export-facing sectors have mounted a strong recovery. With the continuation of the recovery, Singapore should get closer to fiscal balance in the current fiscal year. Although the government announced a new package of measures to help households and businesses to cope with rising inflation in June, the government continues to show efforts to minimize the public deficit as it plans to fund it by reallocating the existing budget. Despite a significant drawdown of SGD 42.9 billion in FY2020 and FY2021 (8% of 2021 GDP) in the reserves built-up in the past to fund a budget balance that turned into deficit, Singapore’s fiscal reserves remain substantial, estimated at between 200% and 300% of GDP.


Singapore is a net creditor country, with a strong balance sheet and zero net debt. The seemingly high public debt (146% of GDP in 2021) comprises mainly long-term bonds and securities issued for reasons unrelated to the government’s fiscal needs. However, the parliament passed the Significant Infrastructure Government Loan Act in May 2021, which allows the government to borrow up to SGD 90 billion to finance long-term and large infrastructure projects (costing at least SGD 4 billion each). The plan to increase the goods and services tax (GST) by 2 percentage points – by two one-point increases in 2023 and 2024 - will help raise SGD 3.0 to 3.6 billion of revenue each year. The government plans to dedicate this to healthcare amid aging population.

The People’s Action Party (PAP) remains a dominant ruling party in Singapore’s politics, although its 2020 general elections saw its popular vote drop to 61%, from 70% in 2015. In April 2021, Deputy Prime Minister Heng Swee Keat announced that he will step aside as the leader of the fourth-generation PAP leadership team, disrupting the plan for Singapore’s leadership succession. A year later, Prime Minister Lee Hsien Loong finally named Finance Minister Lawrence Wong  as leader of the PAP 4G (fourth generation) team. During his political career, Wong was appointed Minister for National Development, Minister of Education and co-shared the COVID-19 multi-ministerial taskforce, among other things. In June 2022, the presumptive next PM was promoted to Deputy Prime Minister. With the announcement of a roadmap for the next decade (Forward Singapore), as well as the 2022 budget, he has placed a particular emphasis on social policies amid growing inequality, rising healthcare costs and an ageing population.

The amicable phase begins with the seller contacting buyers in writing, by telephone and, where permissible, by visiting the buyer’s business premises. If there is no response from the buyer, a site visit and online searches are conducted to ascertain the operating and legal status of the buyer. If the buyer does not make attempts to settle the matter amicably, legal proceedings can be used to recover payments for goods sold and delivered in Singapore. It is, however, prudent to ensure that the buyer has sufficient assets to satisfy the debt before proceedings are initiated.

Singapore is a common law jurisdiction. Its laws are principally governed by Supreme Court of Judicature Acts, State Court Acts, other statutes which have procedural application (or contain procedural provisions), the Rules of Court, practice directions, case law and the court’s inherent powers.

If a defendant fails to enter an appearance or fails to file a defence within the time specified in the writ, the plaintiff may enter default judgment against him. This can be a final judgment or an interlocutory judgment, depending on the nature of the claim.

A judgment can be enforced by a variety of writs of execution. These include a Writ of Seizure and Sale of movable and immovable property, a Writ of Delivery and a Writ of Distress. These writs authorise court officials to take appropriate measures to give effect to the judgment.

This can be an appropriate solution when the debtor is owed a debt by a third party (the garnishee). When the creditor garnishes the debt, the garnishee must then make payments due to him, rather than to the debtor. To collect these debts, the creditor must first apply for a garnishee order nisi. This can be filed without the involvement of other parties and leads to “show cause” proceedings. If the garnishee confirms that there are monies due and owing to the judgment debtor at this stage, the Registrar may proceed to make the garnishee nisi absolute.

If the creditor is not able to enforce his judgment in Singapore, he may be able to enforce it in a country where the debtor holds assets. This can be done by commencing fresh proceedings, or by registering the Singapore judgment in the foreign country (on the basis of reciprocity of enforcement between the two countries).

When a company is in financial difficulty but has reasonable prospects of being rehabilitated, or if preserving all or part of its business as a going concern (or even that the interests of creditors would be better served than by resorting to a winding up), the company or its creditors can apply to court for an order that the company be placed under the judicial management of a judicial manager.

If an insolvent company is unable to overcome its difficulties, it can be dissolved. This enables the liquidation of its assets, so that creditors can be repaid, at least in part. This process is known as winding up or liquidation. A healthy company can also be subject to winding up if its members no longer wish the business to continue. When a company is wound up, its assets or proceeds are first used to pay off any creditors. Following this, any balance remaining is distributed pro rata amongst shareholders. 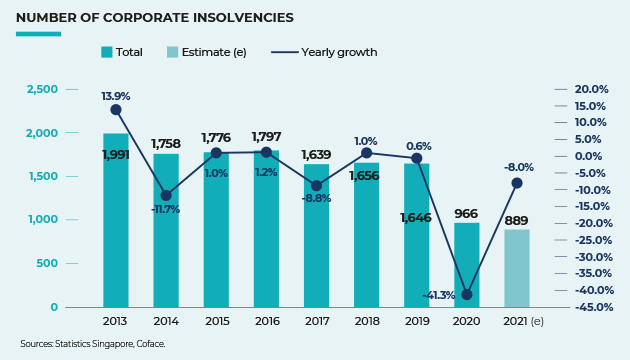