The South African economy rebounded in 2021. This was largely due to the positive base effect and the boom in commodity exports, as activity was further disrupted by COVID-19, the July riots and the resumption of power cuts in the second half of the year. In 2022, economic growth is expected to ease back to its usual sluggish pace. Domestic demand will be the main driver. However, household consumption (60% of GDP) will remain constrained by extremely high unemployment, a lack of hiring and low wage increases in the public sector, coupled with a slowdown in consumer credit as monetary policy is tightened. In November 2021, responding to 5% annual inflation, the central bank hiked its key rate for the first time in three years, raising it by 25 basis points to 3.75%. Rates are expected to continue increasing in step with tighter U.S. and UK monetary policies. This will put pressure on the rand, which, added to high energy and food prices, will stoke inflationary pressures. Commercial banks will therefore be forced to raise their rates, even though their average prime rate was already 7.25% at the end of 2021. Public investment and consumption will be subject to fiscal consolidation. Private investment (13% of GDP with the public component), whether foreign or domestic, will continue to be lacking, as the perception of the business environment suffers from high operating costs and recurrent social initiatives. Only the renewable energy sector is expected to do well. This shortage of investment is a major impediment to job creation. The contribution of foreign trade is expected to turn slightly negative. While demand and prices of exported minerals (38% of exports) could weaken, the growth of domestic demand (even if moderate) and higher energy prices will drive imports. Moreover, automotive exports (10% of the total) are likely to remain hampered by a lack of components, while tourism (7% of GDP in 2019) will see a slow recovery. The pace of growth could deviate from our forecast depending on developments in the health situation (about one-quarter of the population was fully vaccinated by the end of 2021), ore and energy prices, the frequency of power cuts, and the social situation.

The public deficit could once again be reduced in the 2022/23 fiscal year. In addition to the continued positive revenue impacts from the substantial profits generated by mining companies and consumption (27% of GDP), the budget could be less burdened by the pandemic and wages (37% of expenditure), provided the authorities manage to ensure that moderation prevails. Yet this will not stabilise the debt burden, whose interest accounts for an estimated 15% of expenditure and 4.8% of GDP. Although the debt is mostly domestic and in rand (89%) and has a long maturity, its amortisation, coupled with the deficit, will account for an estimated 13.3% of GDP in 2021/22. Moreover, the fact that non-residents hold 30% of the domestic share implies sensitivity to international capital movements. Consolidation will depend on ore prices, wage pressures, the health situation, and also on possible new capital injections into weak state-owned enterprises, including Eskom, whose difficult restructuring process continues and who would like the state to take over half of its USD 26 billion debt.


The exceptional current account surplus of the last two years is poised to diminish in line with the goods surplus. While exports (27% of GDP) will be less buoyant, imports will be driven by domestic demand and oil prices, which are likely to be moderately higher. The reduction in the services deficit with the recovery of tourism will not compensate for these developments, especially since the transfer and income deficits will persist owing to payment of customs duties to other SACU members, remittances by foreign workers and income repatriation by foreign investors. FDI remains limited, but foreign exchange reserves are comfortable (equivalent to about five months of imports), especially since they were boosted in August 2021 by the allocation of special drawing rights by the IMF (9% of pre-existing reserves). External debt, 62% of which is owed by the public sector, represented 53% of GDP at the end of June 2021.

In the November 2021 municipal elections, the ANC, which has been in power since the end of apartheid, took 46% of the votes amid low turnout. The ANC’s share thus fell below 50% for the first time, reflecting widespread social discontent. The crisis has exacerbated unemployment, poverty, division and corruption, culminating in July 2021 in riots and looting in KwaZulu-Natal and Gauteng. The traditional opposition parties (DA, EFF) were not the beneficiaries, but independents and regionally-based parties were. While the ANC still has 230 of the 400 seats in the assembly from the 2019 elections, it is more divided than ever, while some prominent members, including former president Jacob Zuma, have been accused of corruption. Its left-wing faction wants land redistribution with limited compensation and increased Black Economic Empowerment (BEE), opposes wage moderation in the civil service, and is holding back the electricity market reform. So far, the judiciary has stuck to a conservative interpretation of BEE, while expropriation would require an unlikely constitutional reform. President Cyril Ramaphosa's term as ANC leader will end in December 2022, when the party is expected to hold a national conference to elect a new leader. Externally, South Africa provides troops to support SACU military engagement in Mozambique.

Electronic Funds Transfers (ETF), including SWIFT payments and international transfers, are used for payments in foreign currencies. Cheques are rarely used, outdated, expensive to process, and vulnerable to fraud. Cheque payments are also subject to a clearing period of 10 working days. The majority of businesses no longer use them. Cash payments do still occur but have the same disadvantages. Letters of credit are issued between banks and serve as a guarantee for payments made to a specified person under specified conditions, including imports and exports. In most cases, irrevocable credits and confirmed irrevocable credits are issued. The terms and conditions can be onerous and should be fully understood before acceptance of these letters. Parties can sometimes secure payment on delivery via bank guarantee. Monies are deposited into a bank account, and the bank in turn issues a guarantee for payment on confirmation of delivery. This type of payment is mainly used in matters pertaining to property transfers.

The National Credit Act states that the creditor must try to contact the debtor via a phone call, before issuing a formal letter of demand (outlining the outstanding obligation, and sent via email, registered post, or delivered by hand). Once this is done, the parties attempt to negotiate a settlement over an acceptable period of time. As creditors are not obliged to accept payment in instalments, they can opt to proceed with legal action to secure a full one-time payment. This phase is much less costly than immediately proceeding with legal action. This phase also provides greater insight for preparing for the litigation phase. Depending on the nature and value of the claim involved, it is sometimes possible to skip this phase and proceed immediately to litigation.

The administration of justice and application of law in South Africa is carried out by the civil and criminal courts. The ordinary courts are the district and regional magistrates’ courts, the provincial divisions of the High Court and the Supreme Court of Appeal. The Constitutional Court is the highest court for constitutional matters. Specialist courts have been established for various legal sectors, including Labour Courts, the Land Claims Court, Special Income Tax Courts, and the Electoral Court.

Determining whether to proceed in a lower court or in the High Court will depend on the type and value of the claim. Decisions of the lower courts can be passed for review or brought to appeal in the higher courts. Some types of cases can only be heard by the High Court, regardless of the quantum of the claim. As a general rule, a court will exercise jurisdiction on the basis that the defendant is resident or domiciled in the area of the court, or if the cause of action arose in that area.

Proceedings in the Magistrates and Regional Courts generally involve a trial (action) process. Motion (by way of affidavit) proceedings are limited to certain cases only. The High Court can hold both trial (action) and motion (application) proceedings. In action proceedings, the process commences with a summons and is concluded with a trial stage, where witnesses give testimonies. With application (motion) proceedings, the matter will be determined with reference only to written documents and, as a general rule, no oral evidence is permitted. Evidence is set out in affidavits and cannot be contested by cross-examination. Although motion proceedings were generally quicker and cheaper than actions, applications can now end up costing more than action proceedings. When the court is faced with an application in which it is evident that there is a material dispute of facts between the parties, it will then refer the matter to trial.

The alternative to court proceedings is to refer the dispute or claim to arbitration, although few parties are willing to agree the required costs. Arbitration can be faster than court processes and the costs of proceedings are divided equally between the parties. Disputes or decisions at the arbitration hearing can be reviewed through an application to court. Arbitrations can be made an order of court by application, for the purposes of execution.

The High Court deals extensively with execution against property, whether movable or immovable. The rules of the Court provide for the attachment and sale of property in order to satisfy the judgment made on the debt.

Foreign judgments are enforced in South Africa by way of provisional sentence proceedings. They are not directly enforceable. The courts which pronounced the judgment must have had the necessary jurisdiction required to entertain the case, according to the principles recognised by South African law on the jurisdiction of foreign courts.

A compromise can be initiated by a resolution of the board of directors, or by direction of a liquidator. They can propose a compromise to all creditors, or a specific class of, creditors and must notify the Companies and Intellectual Property Commission (CIPC) of the proposal. A receiver is appointed to supervise the process. The proposal must be approved by a majority of at least 75%, in value, of the relevant creditors or proxies present at the meeting. If the proposal is accepted, it can be presented to court for confirmation. Once confirmed, the order must be filed by the company with the CIPC within five days.

Liquidation proceedings for a company begin with either a court order on the request of any persons and on the grounds set out in the Companies Act 2008, a request for voluntary liquidation, or an application to court by the shareholders, the creditors, or the company for liquidation (when the company is insolvent). A liquidator is appointed to wind up the company. The liquidator collects all the assets and claims due to the company, sells them and distributes the proceeds amongst the creditors. It is essential that the creditor lodges its claim with the liquidator, regardless of whether it has a judgment or a court order. Once all the proceeds have been distributed, the liquidator files its final liquidation and distribution accounts and makes any payments set out within it. The liquidator then advises the Master of the High Court that the administration of the estate is complete. 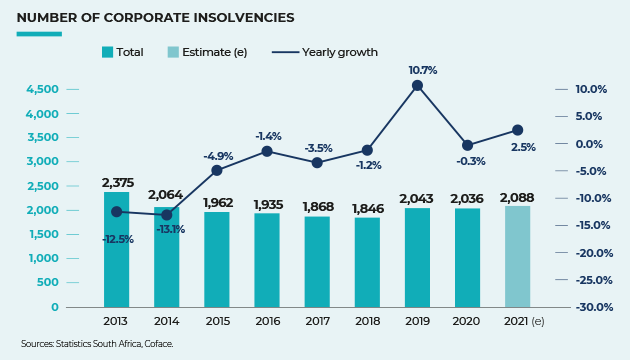