Greater political uncertainty resulting from two parliamentary elections in 2015, drying global liquidity due to the US Federal Reserve’s rate hike process and the weaker Turkish lira, all contributed to dragging down growth. The perception of risk deteriorated further in 2016, following heightened regional tensions, intensifying domestic security problems, the failed coup attempt on July 15th and the credit rating downgrade. Due to these negative domestic and external shocks, along with weaker confidence, GDP growth is expected to decline in 2016.

Government spending is expected to be one of the key growth drivers in 2017. The country’s low public deficit and debt levels (Turkey’s EU-defined debt stock to GDP ratio stood at only 32.9% in 2015) means that it can use fiscal policy as a tool to mitigate economic slumps. To counter waning business sentiment, the government has announced a broad investment package whose objective is to improve the investment climate, via a project-based approach.

The government’s commitment to reforms is also an important factor in supporting sustainable growth. The reform plan that it has introduced is based on four pillars: investment incentives, R&D, the international labour force and costs savings. The authorities have also implemented measures to help boost domestic demand.

Currency risks and the persistent current account deficit are the main challenges. The total amount of external debt that the private sector is required to pay within a year stands at $91 billion. The higher perception of risk could also be hampering the financing of the current account deficit, while the weakening of the lira is hindering the development of private consumption, the economy’s main growth driver. This is being compounded by other factors such as tensions on the Syrian border, higher loan interest rates and rising inflation, which are motivating consumers to delay purchases. 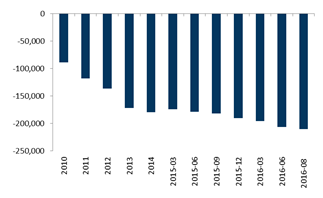 Looking ahead, trends in capital inflows will be key. Between January and September 2016, non-resident capital flows to Turkey fell by 12% to $26.9 billion, down from $30.6 billion in the same period of 2015. This was a major factor leading to a 16% depreciation in the lira against the euro-dollar basket. In 2009, when the economy contracted by 4.8% due to the global crisis, total foreign capital inflows into Turkey shrank by 95%.

“Although the current situation is far from this scenario, the rate of foreign capital inflows into Turkey in 2017 will be very important for its economic performance. The country is still attracting foreign funds, but the sustainability of these capital inflows will depend on the business environment and developments in global financial markets”, says Seltem İYİGÜN, Coface MENA economist.

Retail, tourism and automotive sectors in turmoil, due to political tensions and terrorist attacks

Retail plays a key role in Turkey’s economic growth. The sector has been benefitting from solid economic growth for a decade, bolstered by the country’s large population of close to 80 million and rising per capita income. Although the retail sector offers significant opportunities in the long term, it faces tough challenges in the short term. Growing political tensions, terrorist attacks, the weakening of the lira and rising inflation are all weighing heavily on the sector’s performance. These factors have caused a slowdown in domestic demand - a trend that is expected to continue in 2017.

Retail sales are being dragged down by sparser access to credit (due to higher interest rates) and dampened consumer confidence. The plunge in tourism revenues, related to security issues and deteriorating relations with some neighbouring countries, is also darkening the perspectives for the retail sector.

As concerns the automotive sector, there was a slight decrease in the domestic market but external conditions remain supportive. In the first ten months of the year, total sales declined by 3% compared to the same period in 2015. This fall has mainly resulted from the slow-down in economic activity, which dragged down sales in the commercial subcategory by 12.3% in the January to October 2016 period (on an annual basis). In 2017, the main challenges for the automotive sector will be related to new regulations and fluctuations in the lira. The recent depreciation in the lira could increase upwards pressure on prices in the coming period, given that the import ratio in the domestic car market stood at 76% in the January-October period. On the regulatory side, in November, Turkey introduced an increase in the special consumption tax rate for higher priced vehicles. The new rate takes into consideration price ranges and engine cylinder volumes. This is expected to weigh on luxury car sales by increasing final purchase prices.