18 months after the start of the pandemic, access to vaccination is now the main factor setting the pace of people's daily lives and the global economy. GDP growth forecasts for 2021 have been revised upwards (+5.6%), but this is mainly the result of positive surprises from the United States. These improved growth prospects are reflected in world trade: after a 5% decline in volume last year, Coface forecasts an 11% increase for 2021.
In this context of growth in international trade, countries exporting raw materials are benefiting from an improvement in their terms of trade. At the same time, the slow progress of vaccination campaigns in emerging countries makes it unlikely that herd immunity will be achieved in the next twelve months. This suggests that stop-go processes will persist, and continue to constrain domestic demand in most emerging economies.
Finally, Coface notes an increase in political risk linked to the health crisis and the acceleration of inflation.

Europe and North America in 2022: towards the end of stop-go and new infrastructure investments

The major health trends have accelerated since Coface published its last Barometer in April, with the vaccination process progressing faster in North America and Europe than in the rest of the world. The acceleration of these vaccination campaigns, combined with the effects of mobility restrictions in the spring, led to a drop in the number of new infections in these areas. Local authorities were therefore able to reopen parts of the economy before the summer. However, two risks make the continuation of this positive trend uncertain:

Provided that these two risks do not materialise, the European and North American economies should be back to near-normal functioning by the end of the summer.
Few changes are to be noted in the growth forecasts. The upward revision of global growth expected in 2021 (+5.6%, +0.5 point compared to the last Coface Barometer) is largely attributable to the United States (+6.5% this year), whose economy has continued to surprise favourably since last summer. These improved growth prospects are reflected in world trade: the Coface model indicates a growth of11% this year.
On the positive side, the implementation of the infrastructure plan announced by Joe Biden will benefit many sectors of activity if it is adopted. In Europe, the release of the stimulus funds announced in July 2020 will have a differentiated impact on economies and will serve multiple purposes: supporting demand, accelerating recovery and promoting development in growth sectors.
For companies, however, an increase in production costs is to be expected: in addition to a persistent shortage of certain electronic components, it also affects transport costs, as well as raw material prices which are expected to remain high.

Since the beginning of April, the health situation has remained difficult in several Latin American countries (notably Brazil and Argentina), and in India. Further increases in the number of infections have also been observed in several Asian countries (e.g. Malaysia, Thailand, Korea and Singapore), with high-frequency mobility indicators pointing to lower economic activity in these areas. The number of people infected with the virus also increased rapidly in Africa and Russia in early summer. The trend is more positive in Central and Eastern Europe, the Middle East, and Turkey.

Besides the health context, the rise in inflation (+8.1% year-on-year in Brazil, a 5-year high) and the subsequent tightening of certain monetary policies are likely to limit the extent of the recovery in domestic demand. Countries whose materials account for a large share of imports will be penalised by a significant rise in their import prices. This is the case for China, whose imports of raw materials represent more than 30% of its total purchases of foreign goods. While consumer inflation remains contained in China at this stage (+1.3% over one year), the sharp rise in producer prices (+9% YOY, a 12-year high) argues for its acceleration in the months to come.

Inflationary risks have been in the news in recent months. In this context, the annual update of the Coface Political Risk Index shows a strong rise in political risk across the world, and particularly in the emerging countries. Indeed, figures show a deterioration in living standards and purchasing power, as well as a rise in inequalities observed following the COVID-19 crisis. At this stage, these conditions are not necessarily leading to popular uprisings, which remain limited by people’s capacity to mobilise.
In 2020, the social risk index rose sharply (+5 points) to 51% at the global level, reached its highest-ever level. Despite the numerous fiscal and monetary support measures, 140 of the 160 countries assessed saw their GDP decline last year. At the same time, the unemployment rate has increased in 145 of these 160 countries. The increase in this risk is more marked in high-income economies, which have a lower initial risk level. However, despite these developments, the countries with the highest level of social risk remain Yemen, Syria, Iraq, Venezuela, Libya, Lebanon, Sudan, Iran, Algeria, and Saudi Arabia.
The conflict index, the second component of the Coface Political Risk Index, is calculated according to the number of conflicts, their intensity, the number of victims and their duration. In 2020, Azerbaijan and Ethiopia saw an increase in this index due to the conflicts observed on their territories. They are followed by countries fighting terrorism or in civil war, such as the Central African Republic, Sudan and Mali. 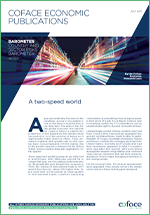