The longest industrial boom in the last thirty years in the Eurozone ended last November. The impact of this was felt in the first quarter of 2019: global trade is slowing (2.3% forecast by Coface, against 3% in 2018), global GDP growth is expected to be the lowest since 2016 (forecast of +2.9%, down 0.3 percentage points from 2018), and companies are much less confident and are pushing back their investments. This year, the number of business insolvencies is expected to increase in 26 out of the 39 countries analysed, compared to only 19 in 2018.

Unsurprisingly, European companies are the weakest: Coface anticipates a 3% increase in insolvencies in Western Europe and 4% in Central and Eastern Europe. In Germany, the erosion of business confidence in the manufacturing sector is much stronger than among its neighbours. The German economy's high degree of openness, combined with its exposure to risky destinations, such as Turkey, the United Kingdom, China and, to a lesser extent, the United States, are holding back international sales. Orders have dropped by over 4% in March for manufacturers, which is the lowest since January 2017.

After the automotive sector the assessment of which in Europe, North America and Latin America was downgraded by Coface earlier this year, it is now the turn of the suppliers of its inputs to suffer the consequences of falling automobile sales. Chemicals are particularly impacted. Petrochemical businesses are also sensitive to rising oil and ethane prices and changes in the regulatory framework and the behaviour of consumers, who are increasingly concerned about the environment. This trend pushes Coface todowngradethe chemicals sector in the United States, Germany and the Netherlands tomedium riskand tohigh riskin France, the United Kingdom and Italy.

The rise in oil prices (which should remain at a comfortable level, $65 on average in 2019, according to Coface) and the recent reorientation of the US Federal Reserve’s monetary policy are helping to stabilise credit risk in the Middle East. Saudi Arabia's assessment is therefore upgraded to B. The textile-clothing and wood sectors are also benefiting from increased budget spending, explaining the upgrade of their assessments to medium risk. In the United Arab Emirates, the country assessment of which was improved last February, three sectors fall into the medium risk category: automotive, notably in response to the many infrastructure projects, including Expo 2020; retail, driven by stronger growth, investment, and tourism; and textile-clothing, related to increased purchasing power and changing consumer behaviour. 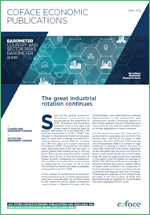 Download this press release : The turnaround in the industrial cycle hits companies in the chemicals... (265.60 kB)
Top